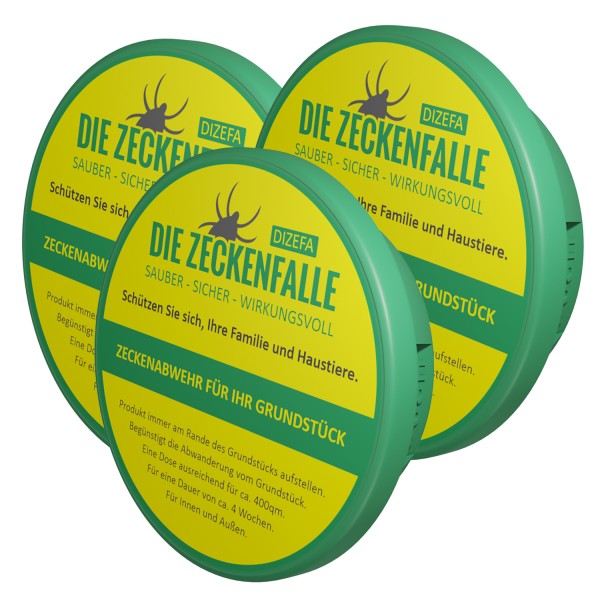 In your immediate vicinity you can protect yourself and your pets from tick bites with the  & quotTick trap & quot .
The biological bait trap is non-toxic and environmentally friendly.
Simply place the trap on the edge of your property. The attractants attract the ticks and they get stuck in the trap.
The trap is sufficient for approx. 400 square meters. It should be replaced after about 4 weeks. The disposal takes place with the household garbage.

THE TICK - A TINY SPIDER

There are ticks all over Europe. The common wood tick (Ixodes ricinus) belongs to the shield ticks and is the most common species in Germany.

The small arachnids mainly sit in warm, somewhat shady places in the undergrowth, on grasses, bushes, on the edge of the forest as well as in gardens and fields at a height of up to 1.50 cm. Since the tick is a parasite, it needs other living beings to survive, from whose blood it feeds. Their hosts include wild animals, domestic animals and humans. With its & quotHaller's organ & quot; the tick can perceive the fragrances of a possible victim (sweat). It also reacts to body heat and to exhaled carbon dioxide.

The tick drops in a flash and clings to fur, fabric or skin.
It scratches the host's skin with its jaw claws (chelicerae), pricks it with its lancing device (hypostome) and sucks the blood. In doing so, it secretes numbing substances so that the person concerned may U. only later notices that a tick has stung him.
Because of the "tools" that the tick uses, zoologists speak of a "sting" rather than a "bite" as is common usage.

Ticks are feared as carriers of various diseases. The best known are early summer meningoencephalitis (TBE) and Lyme borreliosis. However, not all ticks are infected with these viruses and bacteria. Careful control of clothing and skin are important after a stay in nature in order to remove ticks as quickly as possible. If a tick is infected, the TBE pathogens immediately enter the bloodstream with the saliva. In bacterial borreliosis, the infection does not take place until several hours later.

Important instructions:
The lumber trap can prevent the risk of tick bites, but it is not 100% safe. We therefore advise you to check humans and pets for ticks after they have been outdoors.
Don't break the trap or eat the bait.
German branded product.