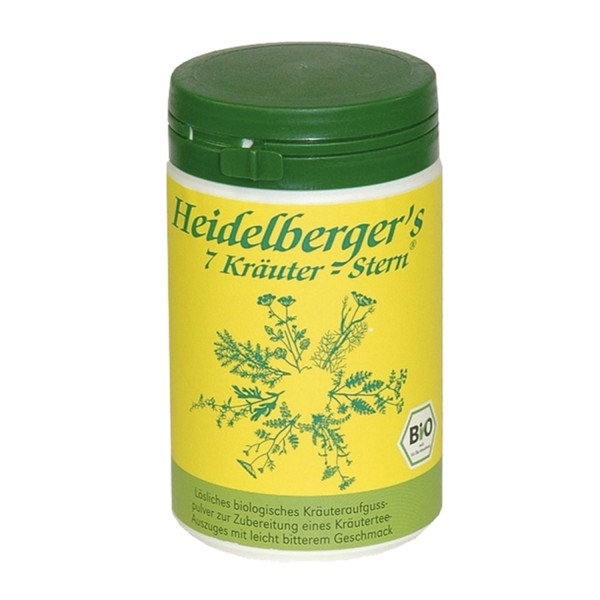 HERBAL POWDER ACCORDING TO BERTRAND HEIDELBERGER

Bertram Heidelberger was born in 1845.
His own illnesses, including serious ones, led him to observe the people around him more closely and to research and try them out in the field of natural medicine. He made the experience that diseases often start at an early age.
Heidelberger recognized that food and digestion have a major influence on mucus formation.

Slime (mucus) is in itself something useful and natural. It is secreted in the body by the mucous glands and takes on various tasks (oral secretions, bile, lungs and bronchi, urogenital tract). Furthermore, the mucus in the body is used to bind and remove waste products from the metabolism and the immune system.

Unhealthy eating habits and other influences lead to too much mucus being accumulated and stored. This can make the blood thicker and the function of the internal organs impaired, the immune defense weakened and the entire metabolism slowed down. In the course of our lives more and more waste products and toxins can accumulate in the body, which over the years more and more damage our entire organ system and blood vessels. In this way more or less serious diseases develop with increasing age.
Today we also speak of "waste products" in this context, which accumulate in the body and affect health.
Bertrand Heidelberger has made the result of his many years of experience in the field of naturopathy available to posterity as a legacy in the form of his highly effective herbal powder.

His herb powder should fulfill the following task:
Quote Heidelberger : " It favors the state of health of saliva and thyroid glands, cleanses the stomach and kidneys of the dangerous mucus and ensures that the daily food is processed correctly and naturally, that there is fresh and pure blood every day. It disinfects everything that is in the intestines, so that neither the gas nor the stool can smell bad. It promotes bowel movements and destroys the mucus that can cause metabolic disease, hernia, hemorrhoids, cancer, eye disease, blindness and other diseases. "

Every single one of the medicinal herbs has a high healing power and effectiveness. The intensive interaction of these herbs has a healing effect on the body. The metabolism is positively influenced, the liver and kidneys are relieved. The herbs are expectorant and mucus secreting, blood-purifying and detoxifying.

Wormwood (Artemisia absinthium)
Wormwood is the bitterest indigenous medicinal plant, has an antispasmodic effect, stimulates blood circulation and supports the stomach and intestines. Hildegard von Bingen called wormwood the "most important master against all exhaustion".
Yarrow (Achillea millefolium)
The yarrow is referred to in old herb books as the "salvation of all pests". The medicinal plant improves fat digestion and stimulates the digestive tract.
Juniper (Juniperus communis)
Juniper is important for the kidneys and contributes to the improvement of the overall metabolism.
Anise (Pimpinella anisum)
Anise stimulates all body functions, is good for the respiratory organs (mucus-releasing) and supports digestion (eg with bloating). Anise is a warming plant.
Fennel (Foeniculum vulgare )
The fennel is also good for the respiratory organs (mucus looser), it has a calming effect on the digestive organs and is very warming.
Carum carvi
The caraway has a stimulating effect on the stomach, calms the intestines and supports the liver and bile.
Bibernelle (Pimpinella saxifraga)
The Bibernelle has a secretion-promoting, blood-purifying effect and is a versatile medicinal plant.

Heidelberger's herb powder is a bit bitter and therefore may take some getting used to. The bitter taste is often missing in our diet today, but it is very important for a functioning digestion. The application of the powder only makes sense if it is carried out consistently over several weeks. At the beginning you can possibly observe a stronger mucus build-up - ie the mucus dissolves and can be excreted - but will then feel more vital from week to week.

Take a knife point or up to 12 teaspoons of herbal powder in your mouth every morning (sober) and in the evening (before going to bed), salivate well and leave it on the tongue for a little longer. Good salivation in particular helps to achieve a really positive effect.
Preparation as tea: in the morning (sober) and in the evening, pour half a teaspoon of 7-herb powder with hot water and let it steep for three to five minutes.