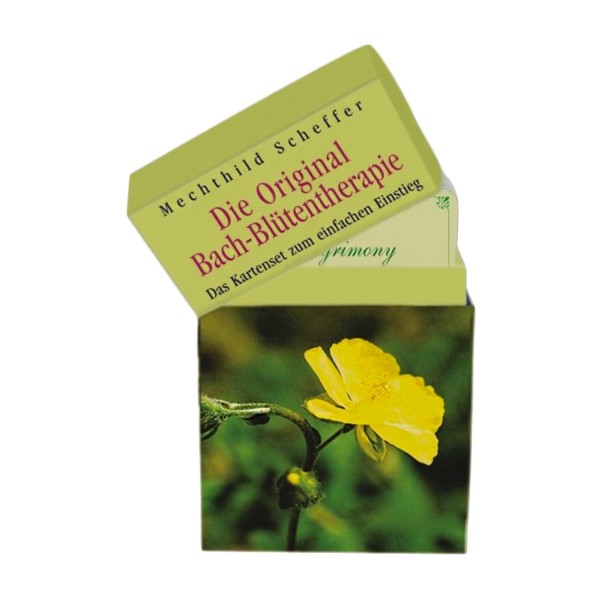 Description Reviews 1
Description
“Illness arises where the human being no longer perceives the connection of his soul with... more
Close menu
Product information "Original Bach flower therapy as a card set"

“Illness arises where the human being no longer perceives the connection of his soul with the universe and thus cannot recognize his life mission. This creates disharmony, loss of energy, disruption. The states will manifest themselves from the finer to the more solid. From negative emotions to physical illness. Any illness should always be viewed as a red warning light. It is not a punishment, but a corrective, which tells us that we are doing something wrong. Every illness is preceded by a negative state of mind. "
(Dr. Edward Bach)

British doctor Dr. Edward Bach (1886-1936) developed Bach flower therapy in the thirties of the last century. It is one of the alternative naturopathic procedures.
Dr. Edward Bach believed that disturbances on the mental and emotional level triggered physical disturbances and illnesses. He defined seven groups of mood disorders and assigned certain plant essences to these basic mood states. He believed that the right plant extract would bring about an improvement on the emotional level.

"Do not fight, but recognize and overcome, because that  perfect healing only occurs within us. "

Bach flower therapy offers support adapted to the state of mind. It has a harmonizing and balancing effect on the emotional state.
Bach flowers in the classic sense are preparations of the aqueous extracts from 37 different flowers of wild plants. In addition there is the essence rock water (spring water) and that  Combination remedy No. 39 (Rescue®, First Aid Remedy, Five Flowers Remedy, emergency drops, first aid drops).

The flower essences were tested by Dr. Bach in self-experiments and on his patients. He found that these essences actually positively change feelings, states of mind and ways of thinking and thus  can indirectly influence physical suffering. In addition to his excellent scientific and medical knowledge, Dr. Bach goes back to his intuition and the lost knowledge of the druids.

The Bach flower therapy as a gentle naturopathic method is suitable for the treatment of humans, animals and plants.

"If we want to find out which remedy is right for us, we must first clarify our purpose in life, ask ourselves what we actually want to achieve and also understand the difficulties we encounter on our way."

The author of the basic works on Bach flower therapy has written Dr. Bach's in German-speaking countries  introduced, made known on a broad basis and systematically expanded for 25 years. It has been the official one since 1981  Representative and lecturer of the Dr. Edward Bach Center for Germany, Austria and Switzerland. Your international  Mechthild Scheffer's reputation as a specialist makes it a sought-after speaker and cooperation partner in the European and  outside of Europe. The teaching and training program that she developed in 1982 and has been continuously developing since then - the Original Dr Bach Flower Seminars - has already been completed by several thousand self-practitioners and practitioners.

With this set of cards, the internationally recognized Bach flower expert is presenting the original Bach flowers in a handy card format for the first time: In this way, everyone can individually put together their own personal flower mix in daily use. Each individual card shows a color image of each individual blossom on the front, and the personal one on the back  Development process before and after taking the respective flower explained. In this way, the use of the original Bach flowers can be learned quickly and easily. An indispensable companion for everyday life.

For further and more in-depth information, we recommend the books by Mechthild Scheffer: